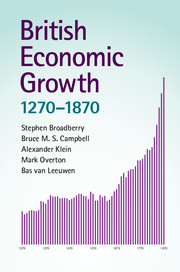 This is a definitive new account of Britain’s economic evolution from a backwater of Europe in 1270 to the hub of the global economy in 1870. A team of leading economic historians reconstruct Britain’s national accounts for the first time right back into the thirteenth century to show what really happened quantitatively during the centuries leading up to the Industrial Revolution. Contrary to traditional views of the earlier period as one of Malthusian stagnation, they reveal how the transition to modern economic growth built on the earlier foundations of a persistent upward trend in GDP per capita which doubled between 1270 and 1700. Featuring comprehensive estimates of population, land use, agricultural production, industrial and service-sector production and GDP per capita, as well as analysis of their implications, this will be an essential reference for anyone interested in British economic history and the origins of modern economic growth more generally.

• The first systematic quantitative account of British economic history reaching back to the thirteenth century, providing the most comprehensive framework yet for understanding long run economic development • Offers a detailed grounding of the quantitative material in the historical context, appealing to economic historians with a background and training in history as well as those with a training in economics • Appeals to a global audience by placing the British experience within an international comparative perspective

‘This book continues the path-breaking tradition initiated by Phyllis Deane and W. A. Cole [in] British Economic Growth, 1688-1959: Trends and Structure (1962). I can only congratulate Cambridge University Press for maintaining it and encouraging the publication of such a landmark in British and international economic history. My hope is that is will set the standards for research in other countries’ economic history.’ Leandro Prados de la Escosura, Universidad Carlos III

‘Our knowledge of Britain’s growth history has just taken a quantum leap forward. The authors’ well-documented fresh results force us to re-think the views of Malthus and Maddison on growth before 1800. Even the growth implications of the Black Death and the Industrial Revolution now look different. This team of authors sets a high standard of transparency, allowing others to replicate or revise their estimates.’ Peter H. Lindert, University of California, Davis

‘This invaluable volume combines the compilation of masses of core data for estimating GDP and GDP per capita across six centuries with a host of reinterpretations that challenge and frequently demolish long-cherished views of the past. It is a massive achievement that is certain to form the starting-point for historical studies of Britain’s long-run economic performance for many years to come.’ John Hatcher, University of Cambridge

‘This is a path-breaking reconstruction and analysis of the British economy in the very long run, making full use of the available historical data from the Middle Ages onwards, which sets new standards for economic historical research into the ‘wealth of nations’ and sheds new light on the single most important question in the field: why did the Industrial Revolution happen in this part of the world?’ Jan Luiten van Zanden, Utrecht University

‘British Economic Growth, 1270–1870 is a true landmark in economic history. Based on extensive research and a meticulous comparison of sources, it will transform our understanding of Britain’s past and also reshape the debate over the ‘great divergence’ and the causes of the Industrial Revolution.’ Philip T. Hoffman, California Institute of Technology

‘In this book, a team of leading UK economic historians reconstructs Britain’s national accounts to show what happened quantitatively during the centuries leading up to the Industrial Revolution … Excellent bibliography. Summing up: recommended.’ J. Murdock, Choice

‘British Economic Growth, 1270–1870 makes a big leap forward in our understanding of the long-run performance of what became the leading nineteenth-century economy and the workshop of the world. It does so by implementing a giant quantitative enterprise, one that will make it the standard data source for studying the evolution of the British economy for decades to come.’ Journal of Economic Literature

‘This book contains a remarkable amount of advanced scholarship in British economic history, making sense of over six centuries of economic development. It is aimed squarely at the economic history community and its authors can look forward to its influence being felt in that discipline for a long time.’ David Meredith, The English Historical Review

‘British Economic Growth is the collective work of a remarkable international group of economic historians … It is an attempt to reconstruct England’s and Britain’s national income accounts from 1270 to 1870 and to reveal the origins of Britain’s modern economic growth. … a remarkable achievement, which transforms our understanding of Britain’s rise to economic supremacy. … This landmark in British and international economic history is recommended to both experts and all those who are interested in the interrelationships between history and economic development.’ György Borus, Hungarian Journal of English and American Studies