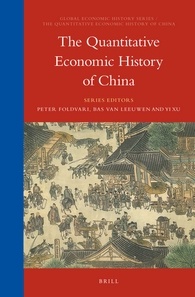 For a long time now, there has been a real lack of quantitative information on the economy of China. Recently, some volumes have appeared dealing with, for example, price series as well as with some other isolated topics, but as yet a systematic overview of long-run quantitative data is still lacking. This becomes especially problematical since economic and social history is increasing relying on quantitative methods.

Therefore, in a combined effort of several Western and Chinese scholars and research institutions, this book series collects data for the compilation of a Chinese historical statistics from 960 onwards. The main objective is to fill in the gap in the quantification of the economy of China and to analyze its long-term evolution in this period. This will be done by individual scholars focusing on individual sectors of the Chinese economy.