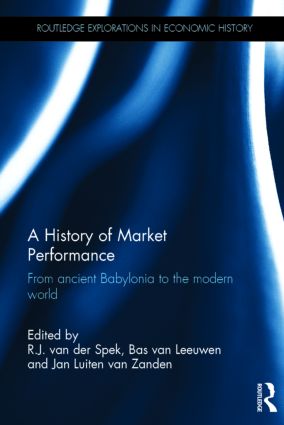 This exciting new volume examines the development of market performance from Antiquity until the dawn of the Industrial Revolution.

Efficient market structures are agreed by most economists to serve as evidence of economic prosperity, and to be prerequisites for further economic growth. However, this is the first study to examine market performance as a whole, over such a large time period. Presenting a hitherto unknown and inaccessible corpus of data from ancient Babylonia, this international set of contributors are for the first time able to offer an in-depth study of market performance over a period of 2,500 years.

The contributions focus on the market of staple crops, as they were crucial goods in these societies. Over this entire period, all papers provide a similar conceptual and methodological framework resting on a common definition of market performance combined with qualitative and quantitative analyses resting on new and improved price data. In this way, the book is able to combine analysis of the Babylonian period with similar work on the Roman, Early-and Late Medieval and Early Modern period.

Part I: Methodology 2. Market performance in early economies: concepts and empirics: With an application to Babylon.P. Foldvari and B. van Leeuwen, 3. Analysis of Historical Time Series with Messy Features:: The Case of Commodity Prices in Babylonia Lennart Hoogerheide and S.J. Koopman 4. Market performance and welfare: why price instability hurts K.G. Persson,

Part II: Market Performance in Babylonia and the Mediterranean in Antiquity 5. Market Performance and Market Integration in Babylonia in the ‘Long Sixth Century’ BC Michael Jursa 6. Prices and related data from Northern Babylonia in the Late Achaemenid and Early Hellenistic periods, ca. 480-300 BC J. Hackl and R. Pirngruber 7. Climate, war and economic development: the case of second-century BC Babylon J.A.M. Huijs, R. Pirngruber and B. van Leeuwen 8. Mediterranean grain prices in classical antiquity Sitta von Reden and Dominic Rathbone 9. Soldiers and booze, the rise and decline of a Roman market economy in north-western Europe Eltjo Buringh and Maarten Bosker

IV: Money and Markets 14. Circulation of Coins and Economic History in Syria and Mesopotamia in the sixth to first centuries BC Frédérique Duyrat 15. A frog’s eye view of the Roman market: the Batavian case. J.G. Aarts 16. The circulation of money and the behaviour of prices in Medieval and early modern England Nick Mayhew 17. Money supply and the price mechanism: the interaction of money, prices and wages in Beijing in the long 19th century Peng Kaixiang

Part V: Long-Term Patterns 18. Risk aversion and storage in autarkic societies: from Babylonian times until the era of globalization B. van Leeuwen and P. Foldvari 19. Growing silver and changing prices: the development of the money stock in ancient Babylonia and medieval England R.J. van der Spek, B. van Leeuwen and P. Földvári 20. Long-run patterns in market performance in the Near East, the Mediterranean and Europe from Antiquity to c. AD 1800 B. van Leeuwen, P. Foldvari and J.L. van Zanden

This long established series provides a platform for books which break new ground in the understanding of the development of the modern world economy. Equally rooted in economics and history, the series is not limited to any particular period or region. Individual titles focus on particular countries, key industries, themes, or international economic relations.