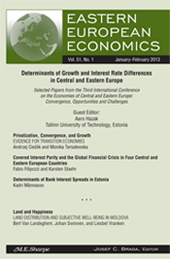 Using the method suggested by Dagum and Slottje (2000), this study estimates the value of national and per capita human capital for six Central and Eastern European countries: Hungary, Slovakia, Poland, Estonia, Bulgaria, and Russia. The estimates are based on available household surveys for 1993, 1995, and 1997. The results indicate that the per capita human capital stock was much lower in Central and Eastern Europe than in the United States in 1982 as estimated by Dagum and Slottje. This paper also shows that the human capital estimates by the Dagum-Slottje method are subject to a sample selection bias, which can be corrected by the Heckman selection model.

#logo or frontpage of the journal if a big picture#