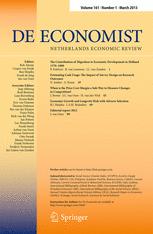 Migration always played an important role in Dutch society. However, little quantitative evidence on its effect on economic development is known for the period before the twentieth century even though some stories exist about their effect on the Golden Age. Applying a VAR analysis on a new dataset on migration and growth for the period 1570–1800, we find that migration had a positive effect on factor accumulation during the whole period, and a positive direct effect on the per capita income during the Golden Age. This seems to confirm those studies that claim that the Dutch economy during its Golden Age at least partially benefitted from immigration.